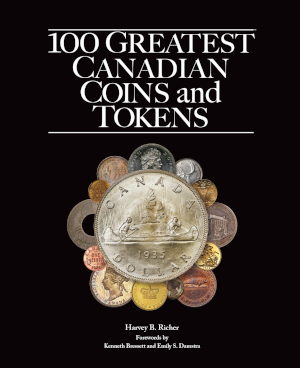 Dr. Harvey B. Richer’s new Whitman Publishing book, 100 Greatest Canadian Coins and Tokens, premiered this summer at the 2022 convention of the Royal Canadian Numismatic Association in Ottawa. It made its United States debut a few weeks later at the American Numismatic Association World’s Fair of Money in Chicago. Now the 160-page hardcover coffee-table volume is available from bookstores and hobby shops and online. Here, Dr. Richer gives an inside look at how he planned and wrote the book.

How does one choose the greatest coins and tokens of any country? A survey of experts? That would unquestionably turn up a huge diversity of results. Nevertheless, this was one route I took to establish Canada’s top 100 coins and tokens. There is a society of active numismatic historians and writers in Canada, the Canadian Numismatic Research Society (CNRS), of which I am a member. Other affiliates who are likely well known to the general collecting community include Paul Berry, past curator of the National Currency Collection of the Bank of Canada; Brian Cornwell, founder of the ICCS grading service, which grades and encapsulates mainly Canadian coins; and James Haxby, author of the bestselling Whitman Guide Book of Canadian Coins and Tokens. This group is not composed of active coin dealers (although there are a few in the society). Their collecting and writing tastes generally run to more eclectic subjects, such as tokens and medals.

Early in the research for 100 Greatest Canadian Coins and Tokens, David Bergeron, the president of the CNRS and current curator of the National Currency Collection of the Bank of Canada, polled the members of the society at my suggestion, asking them to name up to five of their favorite coins and tokens related to Canada. A number of very useful suggestions were proffered by the group, and about half a dozen that I had not originally chosen were included in the final list. In the end, however, the choices were largely mine.

Those well versed in Canadian numismatics may find some of the entries in my anthology a bit odd, such as wampum belts, a U.S. encased postage stamp, a Government of Newfoundland $25 bond, a very common 1938 Newfoundland 1-cent coin, counterstamped Canadian dollars, and a number of high-mintage Canadian commemorative silver dollars. It may be fair to say some of these are not even coins or tokens, and as such do not belong. But each of these selections has a wonderful story to tell related to the development of Canadian coinage, and that is what most interested me in writing this book. Of course, all the high-priced, famous Canadian coins are here, too: the 1911 silver dollar, once called the world’s most expensive coin; the gold $10 and $20 pieces from British Columbia; the 1890-H (the “H” mintmark indicating that it was struck at the Heaton Mint in Birmingham, England) 50-cent coin; the 1893 Round Top 3 10 cents; the 1936 Dot coins; and the unique 2003 gold $1 coin, among others.

Instead of ordering the coins or tokens by some criterion of greatness (for example, recent auction prices or total number of examples known), I chose to produce a more or less chronological ranking. In this way, you can make historical connections between the various entries and follow, in a more continuous and comprehensive manner, the development of Canadian coinage from the earliest examples of wampum—used in trade among the Indigenous population and later with Europeans—all the way to Canadian coinage after Confederation, when Canada had its own mint and was a member of the British Commonwealth of Nations. All the physical specifications, auction details, pricing, and rarity information are included for each entry, but the narrative is a historical one.

While the title of my anthology is 100 Greatest Canadian Coins and Tokens, the book contains many more than 100 individual coins and tokens. This is because several coins and tokens have been treated in a single essay both for clarity and to reduce duplication. For example, each of the three 1936 Dot coins clearly deserves its own unique entry, but this would be unduly repetitive. Additionally, only a few examples of major varieties were included (for example, Flat Top and Round Top 1893 10 cents), and less dramatic varieties generally did not find their way into the final compilation.

No one person should decide on the ranking of anything, let alone something as controversial as the 100 greatest coins or tokens of any country. Collectors have their own favorite areas regarding what appeals to them, from a historical perspective or because of scarcity or availability, while dealers often pursue those coins that they believe can be resold at a profit. These would introduce very different biases into the selection of the greatest coins and tokens, so I decided to let a knowledgeable cross-section of the community do this hard work for me.

I contacted a number of dealers and collectors whom I knew and asked them to contribute to the ranking process. The members of the Canadian Numismatic Research Society—the group mentioned above, of Canadians interested in the history and promotion of Canadian numismatics—were also asked to rank the entries in the book. I sent all these individuals a list of the 100 entries ordered more or less chronologically, as they currently appear in the book. The rules were few and simple:

1. No new additions allowed at this ranking stage.

2. At least 20 entries had to be ranked but, of course, more were preferred.

3. The top 100 Canadian coins and tokens were chosen from a list where a number 1 vote was worth 100 points, a number 2 vote 99 points, and so on. The weighted scores were then tabulated to produce the rank order of the entries.

Not surprisingly, the 1911 pattern silver dollar was ranked the number 1 Canadian coin or token—identical to its ranking in 100 Greatest Modern World Coins (by Charles Morgan and Hubert Walker). In fact, it would have been a surprise if the 1911 pattern dollar had not achieved this exalted position. (At one point it carried the moniker of the “World’s Most Expensive Coin.”) Ranked number 2 are the British Columbia gold coins of 1862, of which only eight are known of both denominations together. Entries 3 and 4 are the 1936 Dot set and the 1921 50-cent coin. Tokens and fiat money of various sorts fared very well, holding down nine spots among the top 20 entries.