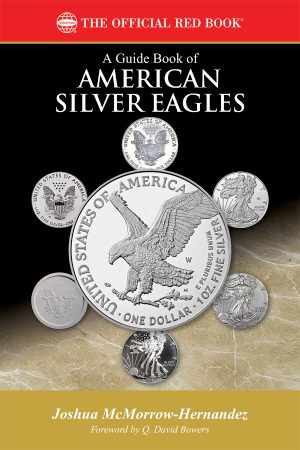 A Guide Book of American Silver Eagles, volume 27 in Whitman Publishing’s best-selling “Bowers Series” of numismatic references, debuts in December 2022, available from booksellers and hobby shops nationwide. Here, author Joshua McMorrow-Hernandez discusses his own introduction to American Silver Eagles, why the coins are so popular, and writing his newest book.

My introduction to American Silver Eagles came about in a most interesting way. My cousin, who also collected coins at the time, visited from out of town for a short summer vacation during 1993. So, there we were—along with my sister, herself a collector back then—three kids talking about coins as a shared interest during much of our cousin’s visit. My mom and dad, who encouraged my numismatic pursuits by purchasing hobby books and magazines, had heard about a fairly large local coin show that was happening during the week of my cousin’s visit. It was to occur over the course of four days, ending on a Sunday.

My family and I had never been to a coin show before. Sunday was our best day to attend for a couple hours in the afternoon—and the advertisement in that Sunday’s newspaper declared it was running from 10 a.m. to 6 p.m.

The show was held in the event hall of a ritzy shoreside hotel in Sand Key, Florida. My dad drove us over and my mom, wanting to make sure we were at the right place, hopped out of the van to scope out the event. She walked into the hotel lobby and was back out before too long, visibly upset. The show manager had told her they were already closing up shop—that it was the last day and most of the dealers were heading home. My mom, armed with the newspaper advertisement, reasoned it was still at least two hours before the closing time.

She went back inside to talk with one of the club’s top brass and see if there was any way they could let us at least check out the bourse floor, if even for a short bit. She was inside the lobby talking with the club’s leaders for at least five or ten minutes. Soon, she returned to the van holding three silver coins in plastic flips and announced that the show manager had apologized for the situation. They wanted us to come in and visit with the few coin dealers who were still there—they’d stick around for us for the next half an hour or so.

As she announced this news to us kids, she passed out the three coins she had been given. She said they were called “Silver Eagles” and that they were brand new—dated for that year, 1993—and that we should save them. I had never seen such a large, heavy, or shiny silver coin; not even the cull Morgan dollar I had spent $5.50 to purchase a few months earlier, for my first twentieth-century type set, could compare.

Mom, Dad, and we three kids hopped out of the van and ventured onto the largely deserted bourse floor. I was after a handful of Lincoln cents for my 1909–1940 Whitman folder. Sis wanted a Peace dollar, and my cousin was looking for foreign coins. We visited two dealers. One gave us back in change a rag-condition 1957 $1 Silver Certificate, which was something I had never seen before. Another gave each of us a free vintage cull nickel. Mine was a corroded 1882 Shield nickel.

Mom introduced us to the officials who gave her the three American Silver Eagles, and we thanked them for the coins and for keeping the show open for us. They were very kind and encouraged us to stay interested in the hobby. And that we did, at least through our teen years. I ended up sticking with the hobby as an active collector the longest, though my cousin’s interest in foreign coins later parlayed into a globe-trekking career in journalism and the visual arts, while Sis still has her coin collection and is herself an artist.

Some years went by, and I was in college and trying to keep the debt at bay by selling off some of my belongings, including a swath of my coin collection. “Don’t sell that silver coin I got for you at that coin show!” my mom jokingly warned. “I worked hard for that!”

My dear mom passed away in 2009 from cancer, and I thankfully hung onto that American Silver Eagle—something I now view as a memento of how much she supported my ambitions, including numismatics. As my foray into the hobby morphed from collecting to writing, editing, and journalism, I have enjoyed researching American Silver Eagles, which hold a unique place in numismatics given their crossover appeal to both investors and collectors.

The American Silver Eagle isn’t “just” a bullion coin. Even in 1986, when the first ones were struck, the coin was offered in Proof format and marketed to collectors. Over the years since, the United States Mint has produced the American Silver Eagle in myriad finishes and collectible variations suitable for numismatic tastes. But even the bullion issues (which were originally marketed as “Uncirculated”) draw countless hobbyists into building date sets.

These coins are legitimate collectibles on every front, encompassing rarity, value, and numismatic challenge. The bullion strikes boast several relatively scarce issues, including the key-date 1996 and several earlier semi-key dates that have lower mintages and conditional rarity in the higher grades. There are also some significant varieties, with the 2008-W Burnished, Reverse of 2007, a decidedly scarce entry. The undisputed “king” of American Silver Eagles is the 1995-W Proof, which has a mintage of just 30,125 pieces. But contending for that spot is the more recent 2019-S, Enhanced Reverse Proof, which saw an output of merely 29,909.

While the American Silver Eagle series boasts numerous expensive keys, semi-keys, and varieties, the series remains financially accessible. A handsome set of bullion strikes can be completed for an outlay fairly close to the prevailing spot price of the coins. Meanwhile, more intrepid collectors can work on a comprehensive set encompassing the many finishes and varieties. And collectors anywhere within that spectrum may choose to complete the set with coins in average Uncirculated or Proof grades, or go all-out on a competitive registry set incorporating certified coins boasting a “perfect” 70 on the numerical grading scale.

No matter the depth of your American Silver Eagle collection, sets like these represent an optimal merging of the bullion and numismatic spheres. The precious-metals investor who wants to dabble in collectibles can build a decent set of Silver Eagles for prices close to their metal value. Meanwhile, the hobbyist who wants to speculate in precious metals has a built-in silver portfolio by completing a set of American Silver Eagles.

Sweetening the deal even further is the outstanding liquidity of a set of American Silver Eagles. Not only are these popular silver bullion coins in high demand among United States collectors and dealers, but they also have global appeal and are quite sought after around the world.

Sealing the deal for many collectors is their colorful legacy. The American Silver Eagle incorporates one of the most beloved designs of all time, Adolph A. Weinman’s Liberty Walking motif. This graceful, patriotic design first appeared on the half dollar in 1916 and continued for the duration of that series until 1947. The Liberty Walking half dollar has become a favorite collectible and enjoys incredible demand among collectors of all ages.

AMERICAN SILVER EAGLES AND YOU

I interviewed Mint officials, coin designers, dealers, collectors, investment advisors, silver miners, and others with specialized knowledge, and brought together a treasure trove of historical archives, plus market information and analysis.

The result is 384 pages covering America’s most famous and popular bullion coin series.

My hope is that you enjoy reading the Guide Book as much as I enjoyed researching and writing it. I think you’ll become as interested in these fascinating coins as I’ve been since I held my first American Silver Eagle thirty years ago.