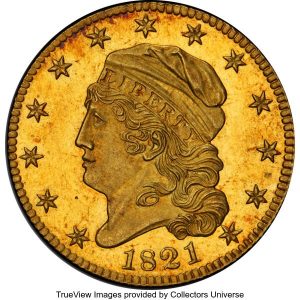 A magnificent 1821 half eagle rode a burst of furiously competitive bidding all the way to $4.62 million, leading one of the finest collections of U.S. gold coins and related patterns ever assembled to $20,459,645 in Heritage Auctions’ Harry W. Bass Jr. Core Collection Part I US Coins Signature®Auction — Long Beach Sept. 29.

Proceeds from the auction will benefit the dozens of Dallas-based nonprofits supported by the Harry W. Bass Jr. Foundation, with a particular emphasis on early childhood education and literacy in Dallas.

“The Bass Trustees are thrilled with the results and grateful to the Heritage Auctions team for its outstanding execution of this sale” said David Calhoun, executive director of the Harry Bass Foundation. “It was an exciting event that far exceeded our expectation.”

Many lots in the auction set new auction records, including:

The event generated perfect sell-through rates of 100% by value and by lots sold. The lineage of many of the coins in this auction can be traced to the heralded auction of Louis E. Eliasberg Sr.’s gold coin collection in 1982.

As a proof, the 1821 Capped Head Left half eagle is prohibitively rare; only two proof examples are known, one of which is included in the National Numismatic Collection at the Smithsonian Institution.

The collection has been out of the reach of collectors for more than 50 years, and has been on display at the American Numismatic Association’s Edward C. Rochette Money Museum in Colorado Springs, Colo., since October 2000.  The foundation’s trustees voted earlier this year to sell the collection, which includes roughly 450 U.S. gold coins dating back to the late 1700s, as part of a plan to increase its annual giving from $2 million to at least $5 million, depending on the results of this auction.

The 1821 Half Eagle prompted 70 bids before rising to the top of the auction’s results, but it was one of three coins in the auction that cleared more than $1 million.

A 1804 Capped Bust Right Eagle, PR63 – the discovery coin for the issue – closed at $2.28 million. The 1804 Plain 4 eagle was struck for inclusion in the diplomatic presentation proof sets that also included the famous 1804 dollars. Initially collected as a regular proof of 1804, later considered a pattern, and finally recognized as a special striking, produced by the Mint to fulfill a specific government purpose, it is now one of the rarest and most valuable U.S. coins. Only four specimens were struck, just three of which can be positively confirmed today. Even the great institutional collections at the Smithsonian and the American Numismatic Society do not include an example of this fabulous rarity.

The second-finest 1860 Liberty Double Eagle, PR65+ Cameo ended at a record $1.2 million (previous record: $367,188). This exceptional example is one of just 59 proof Liberty double eagles duly recorded in 1860, and one of just seven examples traced today.

Other highlights included, but were not limited to:

Since the 1990s, the Harry W. Bass Jr. Foundation has supported qualified 501(c)(3) organizations throughout Dallas, primarily focusing on youth and education. Among its more than four dozen recipients, the foundation counts Frazier Revitalization in South Dallas, Head Start of Greater Dallas, Boys & Girls Clubs of Greater Dallas, the Momentous Institute, Bachman Lake Together in Northwest Dallas and Readers 2 Leaders in West Dallas. But the foundation also helps feed the hungry through such nonprofits as Crossroads Community Services (which provides nutritional assistance for at-risk children in Dallas County), and it supports Austin Street Center‘s work with Dallas’ unsheltered.

Complete results can be found at HA.com/1353.

The next installment of the Harry W. Bass Jr. Collection will be offered Jan. 4-9 through Heritage Auctions at the FUN US Coins Signature® Auction.