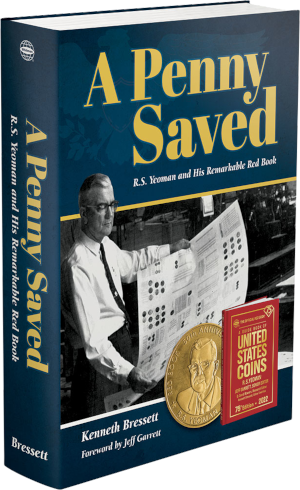 Kenneth Bressett’s memoir A Penny Saved: R.S. Yeoman and His Remarkable Red Book celebrates the life of Bressett’s mentor, hobby legend Richard S. Yeo (known as R.S. Yeoman), and the longevity of the Guide Book of United States Coins (the “Red Book”), first published in 1946. The 352-page hardcover volume is available from bookstores and hobby shops and online (including at Whitman.com). Here, numismatic historian Joel J. Orosz provides an appreciation of both Yeoman and Bressett.

Two Whitman book series, the Handbook of United States Coins and A Guide Book of United States Coins, both truly numismatic institutions, were the inspiration and dedication of two men, who first established, then refined these series for decades. One, Richard Yeo, was the founder, consummate salesman, and ambassador; the other, Kenneth Bressett, was the scholar and developer. The story of their joint achievement, annually renewed, is worthy of note and remembrance.

Richard Yeo was a son of the Badger State, blessed with a flair for design and a knack for making friends. Whitman Publishing of Racine, Wisconsin, hired Yeo in 1932 and soon put him to work selling coin boards and, later, the celebrated blue coin folders beloved by generations of young collectors. Although new to numismatics initially, he wasn’t afraid to ask specialists for guidance.

As R.S. Yeoman, Yeo continued as editor of the Red Book for nearly a quarter century, making it into the most trusted guide for retail prices and earning him the title “Mr. Red Book.” Throughout the 1960s he appeared frequently as a brand ambassador for his many publications at coin shows, conventions, and clubs, where he autographed books and charmed collectors with his modest demeanor and engaging personality. By the time of his retirement in 1970, he had proven his pen name truly apt, for his “yeoman’s service” benefitted not only Whitman Publishing, but all of numismatics.

Of all of Yeoman’s many achievements, perhaps the greatest was mentoring his successor.

Ken Bressett of Keene, New Hampshire, became a numismatist while in his teens. He had printer’s ink in his veins, as one of his early jobs was as a “printer’s devil” in the twilight years of the hot-lead printing process. In the mid-1950s Yeoman was attending a coin show and Bressett discussed with him some questionable items in the Guide Book. Instead of taking offense, Yeoman recognized his talent and later engaged him as a freelance editor. Whitman hired Bressett in 1959, with his responsibilities encompassing the Blue Book and Red Book series. By 1962 he was made assistant editor and later managing editor in 1965, giving Yeoman more opportunities to be a roving ambassador.

Bressett’s tenure as editor lasted an astonishing 53 years; even after his formal retirement in 2018, he has continued with special projects for Whitman. It was natural, therefore, that following Yeoman’s death in 1988, Bressett inherited the title of “Mr. Red Book.”

Bressett’s stewardship was lengthy, and also quietly revolutionary. He enhanced not just two book series but an extraordinarily successful and truly beloved numismatic institution. A glance at the 1966- and 2019-dated editions of both the Red Book and the Blue Book shows how vastly he (often with some behind-the-scenes help from his son, Philip) improved these iconic products. They employ similar organizational schemes, but everything from the typeface to the factual content was enriched. Page counts nearly doubled, incorporating new coin issues, and novel research expunged old errors and added important fresh findings. Timely special features were added.

Ken Bressett achieved the highly improbable: he supervised production of two successful books and for five decades simultaneously preserved and reinvented them—a seamless fusion of tradition and transformation. Two men, two enduring book series, more than three-quarters of a century; one shared sobriquet. Only the oldest coin collectors of 2023 can remember numismatics without the Blue Book or the Red Book, all thanks to the extraordinary exertions of not one “Mr. Red Book” but two.