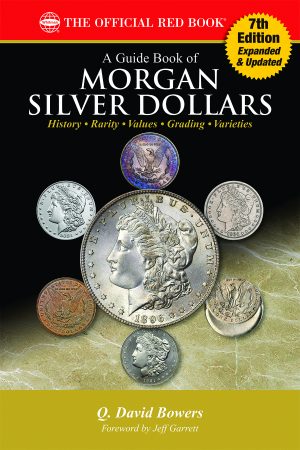 Whitman Publishing will release the newly expanded and updated seventh edition of A Guide Book of Morgan Silver Dollars, by Q. David Bowers, for the 2022 holiday season. The 336-page book will be available in December from booksellers and hobby shops nationwide. In the meantime, it can be preordered (including online at www.Whitman.com).

The seventh edition’s coin-by-coin retail values have been updated in a snapshot of today’s rare-coin market, with detailed pricing in 11 circulated and Mint State grades plus 3 levels of Proof. The book includes hundreds of new images, with photographs of every date in the series plus new illustrations in the history chapters and appendices, and galleries of toned silver dollars and error coins. Analysis of certified-coin populations has been updated. The seventh edition includes an updated appendix on counterfeit Morgan dollars, based on the research of Beth Deisher, and a new appendix on the 1921–2021 centennial Morgan dollar coins. The index has been expanded for easy, comprehensive navigation of the book’s contents.

Following the format of the first six editions, the seventh includes a history of America’s silver dollar dating back to the 1790s, and chapters on the Morgan dollar’s design, how dies were made, the minting process, the five mints that struck the coin from 1878 to 1921, and Treasury hoards and other accumulations. For collectors, Bowers gives advice on ways to collect Morgan dollars; grading and the marketplace; and how to cherrypick rare die varieties. The book’s year-by-year catalog is an analysis by date and mintmark of more than 100 coins in the series. Appendices offer a report on the recent discovery of 1964 Morgan dollar dies and hubs in the Philadelphia Mint’s archives; a study of Morgan dollar patterns; a gallery and descriptions of misstruck and error Morgan dollars (including the 1882-CC “Grand Snake”); a study of counterfeit Morgan dollars in today’s market; and information on the 1921 Silver Dollar Coin Anniversary Act.

“No American numismatic library is complete without the latest edition of A Guide Book of Morgan Silver Dollars,” said Jeff Garrett, senior editor of the Guide Book of United States Coins, in the new edition’s foreword.

The cover of the new seventh edition showcases a nearly perfect 1896-S Morgan silver dollar, graded MS-69. Positioned around it are an iridescent toned Proof of 1894; a cropped view of a 1964 Morgan dollar hub; a rare error coin, struck 25 percent off center; a 1921 “Chapman Proof,” graded PF-67; a Judd-1371 pattern struck in copper; and a 2021 coin marking the 100th anniversary of the historic Morgan dollar’s last coinage.

The Bowers Series, named for Whitman Publishing’s numismatic director, Q. David Bowers, is a popular library of numismatic books, each covering a different segment of the hobby. More than two dozen volumes have been published as of 2022, written by Bowers and other authors including David W. Lange, Rick Snow, Katherine Jaeger, Frank J. Colletti, Roger W. Burdette, Rick Tomaska, and Joshua McMorrow-Hernandez. Together they comprise more than 6,000 pages of history, market data, grading instructions, and other valuable numismatic information. Because Whitman Publishing is the Official Supplier of the American Numismatic Association, ANA members receive 10% off the book when purchasing directly from the publisher. It can also be borrowed for free as a benefit of ANA membership, through the Dwight N. Manley Numismatic Library.